Definitely, ridicule does not kill 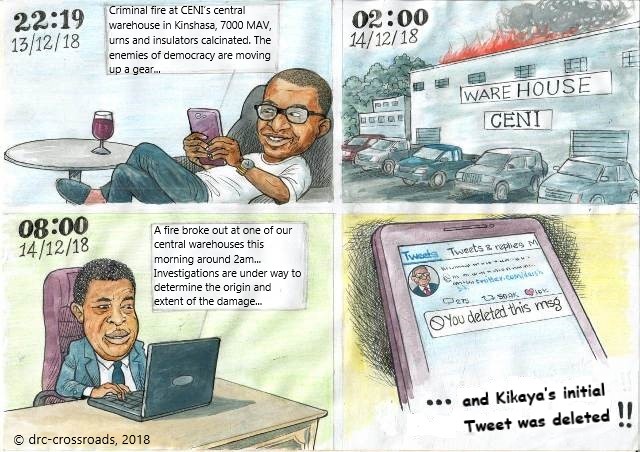 On the morning of December 13, 2018, we learned of the news of the fire that devastated the warehouse of the CENI in Kinshasa, where about 97% of the electoral material intended for Kinshasa was burned down. Quickly, as fast as the fire started, Kabila’s government began to point the finger at the opposition. Yet, a simple look in the social media on the trail of this incident, demonstrates a different story:

“Criminal fire at the central warehouse of the CENI in Kinshasa, 7000 MAV, urns and insulators calcinated. The enemies of democracy are moving up a gear. A sword strike into water. Alternatives are available. “

A fire is declared at one of its CENI warehouses (see Press Release No. 36/CENI-RDC/18)

“The Independent National Electoral Commission (CENI) brings to the attention of the national opinion that a fire broke out at one of its central warehouses of the Haut Commandement Avenue this Thursday 13/12/2018 around 2am in the morning. While investigations are under way to determine the origin and extent of the damage, the CENI reassures voters of the continuation of the electoral process. “

And since then, Congolese have questioned …